With the biggest debate among politicians today, gun control has become the newest platform to work on. It was only a matter of time before technology tried to find a solution for gun control. At CES this year,  Omer Kiyani of Sentinl was the sole smart-gun exhibitor, displaying his companies Identilock Gun Lock.

Smart guns are not a new concept in America. Over the past few years, different companies have developed smart guns. A technology that prevents anyone but the user to shoot the gun. Depending on the company, the guns use a fingerprint  or pulse recognition scanner to identify the user.

While most consumers appreciated the concept, actual gun owners felt their freedom and rights to own a gun were being infringed. They felt the government was controlling their use of their gun much like the consumer is afraid of the government monitoring their Internet use and calls.

While smart guns prevent anyone but the owner itself from shooting the gun, Identilock prevents anyone from unlocking the gun itself except the owner. Smart guns experienced a lot of back lash from the population who actually owns guns, but Identilock provides a compromise between the consumer market and the gun owner.

IdentiLock slips a case over the trigger preventing anyone from pushing the trigger. “[He believes he] took a safe and shrunk down to place over the gun.” To remove the lock, it use a fingerprint release mechanism. This prevents anyone from using it without your permission. Check out the CES Identilock press release. 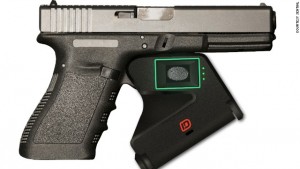 Gun owners disliked the smart gun because it prevented them from being able to share a gun among the family. As a hunting family, I am able to share a gun between my siblings, but with the smart gun design, I would not be able to do that and would have to own 5 guns versus 2 or 3. Each smart gun would have to be programmed to each individual and cause me to have more guns in my household.

Gun Owners like the fact that it is just a lock on the gun not the gun subjected to a single person. This can place double lock guard on your guns within your house. It does  not take away individuality, ownership, or force gun control like smart guns.

While smart guns are not a bad idea, I do not think they are as effective as people would like to believe. There will still be guns that are not smart in the US due to black market and overseas businesses. I think they should be available to the users that wish to see them, but I think the Identilock is much more marketable and realistic for the gun owner.

We would love to hear your thoughts on the newest technology geared toward gun control.